Seems like autumn is creeping up.
Have a nice weekend everyone!
Posted by the mashup mission at 10:01 AM 1 comment:

If you ever get a chance to visit Canada, you will have to go to a cottage, for a weekend at least. Cause honestly, if you've never been to one, you wont know what the Canadian way of life really is about. 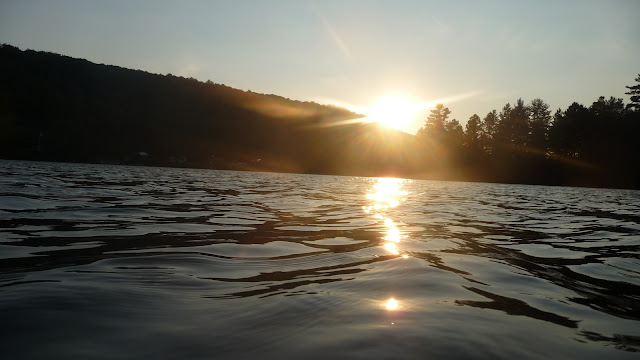 There simply is no arguing about it: Being at a cottage is the Canadian experience. Hanging out in the Canadian wilderness, nothing but woods, lakes, animals and bonfires to experience. 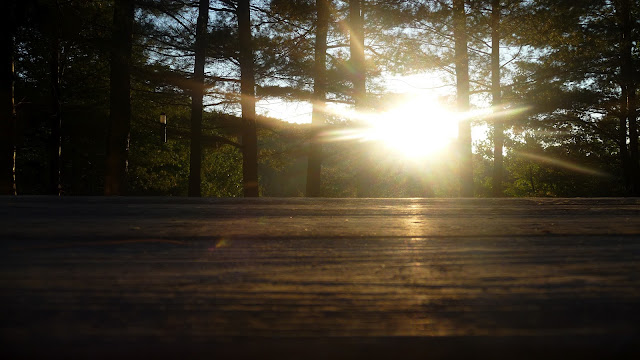 Talking about animals: The squirrels in Canada must be on anabolics. They look as if they've just eaten three South Tyrolean squirrels. As a little snack. Before they have a South Tyrolean badger for supper.
And! There are flying squirrels in Canada. Yes, they are squirrels. And yes, they fly. Or rather glide between the trees. I used to think, that this kind of animals lives in Madagascar only and has big parties singing "I like to move it". Well, that's how wrong one can be...

Posted by the mashup mission at 9:28 AM No comments:

So acting like the little mountain-girl from the European province I admittedly am, I was quite astonished by this apparently futuristic plastic money. I - frankly - felt like I was catching a glimpse of the distant future.
Ok, maybe I am exaggerating a bit. If I made it sound as if we were paying in kind or that we were engaging in countertrade around here, let me assure you: That is not the case. (Although, who knows, how long good old paper Euro will make it?!)

Researching a bit about the super-modern Canadian bills, I found out, that they aren't even that new: The so-called polymer notes were first issued as currency in Australia in 1988! And before the Bank of Canada introduced polymer banknotes in 2011, quite a few other countries had the same idea, such as Singapore, Indonesia, Thailand, Mexico, Zambia, Nigeria, Nicaragua and many more...
The first European country to introduce a full set of circulating polymer banknotes was Romania in 1999, a country that is not specifically known for its role as a pioneer in modern technologies.


Posted by the mashup mission at 11:03 AM No comments:

The world explained by two cows

You give one to your neighbour.

The State takes both and gives you some milk.

The State takes both and sells you some milk.

The State takes both, shoots one, milks the other and then throws the milk away.

You sell one and buy a bull. Your herd multiplies, and the economy grows. You sell them and retire on the income.

You sell three of them to your publicly listed company, using letters of credit opened by your brother-in-law at the bank, then execute a debt/equity swap with an associated general offer so that you get all four cows back, with a tax exemption for five cows.
The milk rights of the six cows are transferred via an intermediary to a Cayman Island Company secretly owned by the majority shareholder who sells the rights to all seven cows back to your listed company.
The annual report says the company owns eight cows, with an option on one more.

You sell one, and force the other to produce the milk of four cows. Later, you hire a consultant to analyse why the cow has died.

You have 300 people milking them. You claim that you have full employment and high bovine productivity. You arrest the newsman who reported the real situation.

You go on strike, organize a riot, and block the roads, because you want three cows.

You charge the owners for storing them.

Everyone thinks you have lots of cows.

You tell them that you have none. Nobody believes you, so they bomb the crap out of you and invade your country.
You still have no cows but at least you are now a Democracy.

Business seems pretty good. You close the office and go for a few beers to celebrate.

The one on the left looks very attractive.

You have two cows borrowed from French and German banks.

You have two cows, but you don’t know where they are.

You decide to have lunch.

I got this text from a very dear friend. I have no idea who owns the rights to it, but I just had to share it.
Have a nice weekend, everyone!

Posted by the mashup mission at 12:14 PM No comments:

Leading up to the 2 weeks and 3 weekends of traditional buzz during the Wies'n, there are quite a lot "Wies'n Warm Up Parties". At those bashes the theme, dresscode, music and food are, as expected, Bavarian Dirndl/Lederhosen style.

Nothing surprising so far, but today I stumbled across yet another pug dog story linked to Oktoberfest and the related Warm Up Parties. Remember, in 2010 a poor little puppy ended up in the lost and found office.

This year a quite fancy Wies'n Warm Up Pug Dog Party was organized. 74 female pug dog owners payed 100 € to enter the event, themselves dressed in rather exotic Dirndl and botox, their dogs in Lederhosen. Makes for an unforgetable group picture! Host of the event was dog "Sir Henry" and his dog-mommy Uschi Ackermann. (The two even have their own homepage.)

During the event some German folk singer performed his new Wies'n hit song called "Scharfe Möpse". For all the non-German-readers here, that translates into either "Spicy pug dogs" or, using more colloquial German language, into "Hot bo*bs". Hmmm yeah, one hell of a classy party entertainment I'd say...

But not enough with the pugs. Her significant other is Gerd Käfer, owner of a successful gourmet food business in Munich and the dog fever in combination with Oktoberfest must have gotten also to him rather severely. While she was organizing the party, Mr. Käfer wrote recipes with Bavarian culinary specialities for - yes, who else- dogs! I'll try to find out if those cook instructions with names like PUG DOG SUSHI (is it just me or does that more sound like a sliced up puppy??)or WOOF PIZZA are bestsellers...

I can just agree with the author of a southern German newspaper who asks himself, if there is no limit to the lunacy grasping people as Oktoberfest time approaches.
Posted by the mashup mission at 6:09 PM No comments:

the mashup mission
I was born in Germany, have a Canadian partner & live in a German-speaking region of Italy. An insane culture clash with unmanageable consequences, right? Wrong. Picking the best out of all those cultures, I enjoy creating a mashup-lifestyle of its own, every single day. Fresh, urbane and simply wicked.